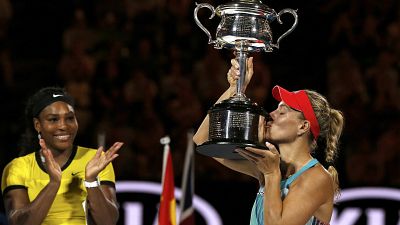 Angelique Kerber upset world number one Serena Williams 6-4 3-6 6-4 to clinch the Australian Open on Saturday and become the first German to win a grand slam title since her childhood idol Steffi Graf in 1999.

The 34-year-old Serena was been seeking her seventh Melbourne Park title and 22nd overall, which would have moved her into a tie with Graf for the most grand slam singles titles in the Open era.

Thanks for a wonderful match Serena. See you next year! #AusOpen https://t.co/rUwLE8LZ3E

On her part, seventh seeded Kerber, however, was not overawed by the occasion of her first grand slam final, breaking twice in the first set as Williams made 23 unforced errors.

Both players suffered early breaks in the third set but the championship appeared to have tipped in the German’s favour in a marathon sixth game when she finally converted her fifth break point to take a 4-2 lead.

She extended that to 5-2 and was serving for the title at 5-3 before Williams fought back, though the inspired German was able to clinch her first grand slam and then collapse onto the court in jubilation.

“My whole life I was working really hard, and now I am here, and I can say I am a grand slam champion, and it sounds really crazy. Unbelievable,” an emotional Kerber said in a courtside interview.