All roads lead to Eritrea for alleged 'two wives offer' 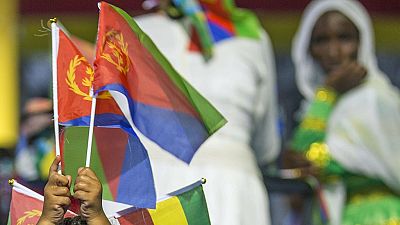 Social media has been buzzing after alleged reports of an order by the Eritrean government to its men to marry not less than two wives or face imprisonment.

The supposed hoax believed to have originated from a Kenyan website, which quoted ‘activists’ as the source of the information, has received a lot of attention from African men on social media including lots of media attention on websites in Ghana and Nigeria.

A document in Arabic circulating on social media alleged to be the order from the Eritrean government subjects the men in the Horn of Africa to polygamy or risk facing a life sentence including wives who oppose the order.

I hear Eritrean men are to marry more than 2 women or face prison term. My Arabic experts is that what this says? pic.twitter.com/mcofUcT16X

“Based on the law of God in polygamy, and given the circumstances which the country is experiencing in terms of men shortage, the Eritrean Department of Religious Affairs has decided on the following:

“First that every man shall marry at least two women and the man who refuses to do so shall be subjected to life imprisonment with hard labour.

“The woman who tries to prevent her husband from marrying another wife shall be punished to life imprisonment,” it is reported.

The country with a population of over 6 million people gained its independence from Ethiopia following a referendum in 1993. There were persistent hostilities between the two countries after Eritrea’s independence leading to the Eritrean-Ethiopian war between 1998 and 2000.

Eritrean women, according to eastafro.com, are the among the top 10 most beautiful girls in the world as they churn out beautiful fashion models and beauty queens. A notable Eritrean top model is Grace Mahary who has walked and worked with some of the top models of the world.

The beautiful features of Eritrean women obviously triggered the social media buzz for a trip and relocation to Eritrea to ‘grab’ the unmarried who the government is allegedly forcing onto the men.

I’m on my way to #Eritrea. Are you? pic.twitter.com/B7LyQgaBnH

When i heard the news from Eritrea….heading to the embassy for my free Visa like… pic.twitter.com/bSWkMUHzQw

When dad goes to Eritrea for business pic.twitter.com/34hiMgZhhR

When you hear your VISA to Eritrea is cancelled pic.twitter.com/LYKNgQU0Rr

Looks like there’s something SERIOUS going on in Eritrea. pic.twitter.com/Rhz8mhBSwl

According to the U.S. Department of State 2011 estimates, 50% of the population is Christian and 48% is Muslim, clearing the widely spread assumption that the country is enforcing Islamic laws.

Eritrean website, tesfanews.net, in an effort to clear the air on the hoax emphasized that “polygamy and even bigamy is not allowed in Eritrea”.

It further laid bare Eritrean laws on marriage which says any person guilty of bigamy will suffer “a definite term of imprisonment of not less than 6 months and not more than 12 months, or a fine…”

This law was further tweeted by Eritreans to educate Africa that “Eritrea is a nation of laws.”