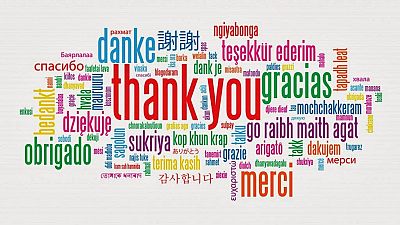 Thank You! This simple phrase in English and its variant in all languages of the world has been recognised with a special day unofficially recognised worldwide to build the culture of expressing appreciation to others.

Several people have been mentioned as founders of the International Thank You Day celebrated on both January 11 and June 11.

The first date does not have a clearly specified founder but the latter date, called World Thank You Day, is linked to two Australian businessmen who were hoping to change the attitude of not showing gratitude by launching “The Thank You Campaign” in 2014.

The two founders, Geoff Kirkwood and Charles Alder got the backing of Brisbane City Council in Australia to extend the campaign worldwide.

Some people have accepted the day and chose to express gratitude via social media.

Today happens to be a sad day in the history of music as legendary musician David Bowie dies at the age of 69. His death follows an 18-month battle with cancer.

Despite the sad loss of this music icon, several fans decided to thank him for the music he blessed the world with.

dark_shark Sad day indeed. Thank you for your work together - you changed my world!

A sad day for music as we say goodbye to The Man Who Sold The World. A Hero, a Rebel, a Starman thank you for the Golden Years. #DavidBowie

Not just a sad day for music but for the world, we've lost an icon, a genius, thank you for the music #RIPDavidBowie pic.twitter.com/8EK9kyBLEm