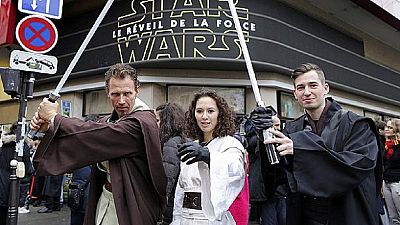 The recently debuted film “Star Wars: The Force Awakens” raked more than $1 billion in global box office at the weekend, making it the fastest to hit that mark in the period since its first release.

According to a statement by Walt Disney Company, in the 12 days since first hitting the screens worldwide, the film has posted an estimated $545 million in ticket sales in the United States and $546 million internationally.

In North America, “The Force Awakens” is already the second biggest grossing movie of 2015 and the number five of all time, posting record Christmas day box office sales of $49.3 million, said the statement.

Film critics agree that the action-packed movie, with both familiar and new faces “successfully recalls the series’ former glory while injecting it with renewed energy.” They said the film was without any doubt worth the hype and money. Film review aggregation website Rotten Tomatoes, has rated the film a whopping 8.2 out of 10

The Force Awakens is set approximately 30 years after Return of the Jedi (1983), and follows Rey, Finn, and Poe Dameron’s fight with the Resistance, led by veterans of the Rebel Alliance, against Kylo Ren and the First Order, descending from the Galactic Empire.