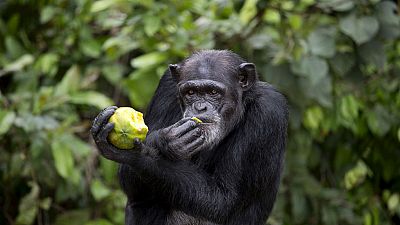 For 30 years, 66 chimpanzees in Liberia were used for medical experiments by the New York Blood Center (NYBC) but were later abandoned without food.

US conservationists, Jenny Desmonds has come to the aid of the animals. She leaves Liberia’s mainland on a boat loaded with fruits and vegetables on a four-hour journey to the islands inhabited only by the colony of 66 chimpanzees.

“Chimpanzees don’t do well in research, they’re very similar to humans as we know. So they were kept in very small cages, crowded environment, they were… I believe they were weekly anesthetized for… to take blood samples or to infect them with hepatitis b and c and test their blood. They did many liver biopsies,” said Desmond.

I believe they were weekly anesthetized for… to take blood samples or to infect them with hepatitis b and c and test their blood. They did many liver biopsies said Desmond.

The New York Blood Center said on its website it conducted the tests on the chimps more than a decade ago, with Liberia’s consent, to help develop a low-cost vaccine for Hepatitis B that has since saved millions of lives.

It stopped animal testing in 2004 and its relationship with the Liberian Institute of Biomedical Research (LIBR) ended three years later, it said, adding that Liberia owns the animals.

NYBC said that last January it gave several months notice that its care for the chimps would cease after it spent five years seeking a solution.

Now the Desmonds want to register an NGO named Liberia Chimpanzee Rescue and build a sanctuary where these and others injured by hunters or kept as pets can be rehabilitated and eventually released into the wild.

“Basically they are completely dependent on humans and New York Blood Center infrastructure moved out of the country and left behind a team of people. But no management structure in terms of making sure that the animals were going to be properly cared for, and they were only feeding them every other day and not sufficiently,” said Desmond.

After the predicament of the chimps was reported in the media, the Humane Society, a U.S. animal welfare organisation, stepped in and raised over 200,000 U.S. dollars for the cause.

To feed the 66 former lab chimpanzees, they take a total of 200 kg of food every time: a costly and arduous task in a country where low agricultural productivity keeps prices high.

Desmond says she is happy to see that the chimpanzees are healthier than they were during her brief visit in July.

“To me the most remarkable experience has been seeing the transformation of the chimpanzees. From the first day when we went out with the boat. When they were still being fed every other day, they were still quite fearful. When we approached the island they would all come running. You would see every chimp running. They came out in to the water, up to the boat, even trying to grab things out of the boat, begging for food, crying and screaming,” she said.