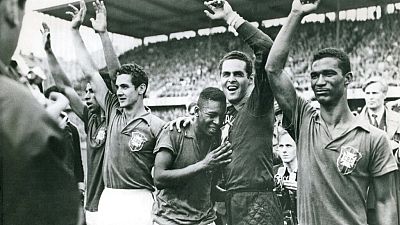 A myth was beginning to be made.

Edson Arantes do Nascimento grew up in the port city of Bauru in the state of Sao Paolo - but he was born in Três Corações, in the neighbouring state of Minas Gerais on October 23, 1940.

His mother Dona Celeste brought him up with his father Dondinho, a pro player whose career was shattered by a knee injury. The legend says that it was when he saw his father cry on the day of the "Maracanazo," when Uruguay won the 1950 World Cup by beating Brazil (2- 1) in Rio, that little "Dico" consoled him, promising him to win the World Cup.

In the meantime, he shaped and re-shaped his technique at more or less informal clubs during "peladas" - matches on wasteground or in the street where the joy of the game and the art of "futebol" took root.

Pelé shone. In his first match with the Radiun team, he scored eight times and thrilled the city's Amateur Football League. As the journalist, Luiz Carlos Cordeiro, tells in his book "Pelé de Bauru" (1997) the league forbade him from crossing the middle line, so as not to kill the tournament!

The Bauru AC, the big club of the city, then took the prodigy on in its youth team, the "Baquinho," and the compulsive goalscorer flews over the competition for several years. And so the pre-teen started to appear in the local newspapers.

The BAC coach, Waldemar de Brito, an ex-pro who participated in the 1934 World Cup, started to believe in this swift scorer and dribbler with extraordinary technique, to the point of bringing Santos to sign a professional contract with the then rather puny 15-year-old.

Reserved, serious, gifted but hardworking, the young striker made his first team debut on September 7, 1956 against Corinthians Santo André (7-1) in a friendly, just a month after his arrival. He entered in the second half and scores a goal, as always. As a symbol, it is Brazil's Independence Day.

He hardens up with a setback in the junior team: he misses a penalty in the decisive match of the competition and his team ends up in second place.

He wrote to his parents, according to the biography "Le Roi Pelé," by Alain Fontan: "I know now that I will never be able to be a great footballer. I was not born to make this career."

But he hangs on and joins the professional team definitively in January 1957. The novice makes nine consecutive appearances without scoring and his first four months are tough, with only six goals in 21 games. The young Pelé is in doubt.

Then in May 15th 1957 Pelé bursts into the news: at Morumbi Stadium in Sao Paulo, Santos beat old rival Palmeiras 3-0, with two goals from the teenager. The first is sensational, an off-centre cross strike, in front of which the Paulista press swoons. Pelé is a name that is finally worthy of print.

A month after this first earthquake in the megalopolis, it is the response in Rio. In a combined team, Pelé beat Belenenses (6-1) at the Maracana with another thundering double. The carioca press marvels. Silvio Pirillo, the scout of the Seleção, spots him with a view to the World Cup the following year.

And everything goes very quickly: on July 7, Pelé wins his first cap, at the Maracana. Argentina won this friendly match (2-1) but the young substitute equalised at 1-1. Three days later for revenge, established for the first time, he scored again (2-0 for Brazil). The story of the future and the only triple-world champion is on the way.

The end of the year confirms the emergence of the phenomenon: Pelé finishes top scorer of the Paulista Championship. As he remembers on the Santos website, "from my first championship, I scored 36 goals (in 29 matches, including preliminaries); for a kid of 16 and then 17, it was a great achievement.