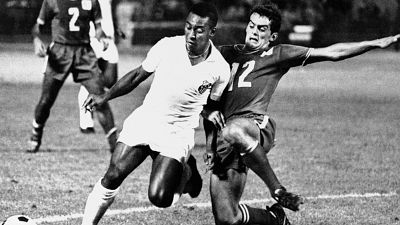 Brazil's Pelé, the world's first football star and genius striker who revolutionized the game of football, died at the age of 82 after battling cancer for more than a year, one of his friends announced on Thursday.

"We love you to infinity, rest in peace," Kely Nascimento wrote on Instagram, a post illustrated with a photo of the folded hands of his family members resting on that of the former footballer at Albert Hospital. -Einstein from Sao Paulo, where he had been admitted a month ago.

The hospital said in a statement that the death was caused by "multiple organ failure".

The only footballer to have won the World Cup three times (1958, 1962 and 1970), Pelé, whose real name was Edson Arantes do Nascimento, was elected athlete of the century by the International Olympic Committee in 1999.

The announcement of his death was a shock for all football fans, eleven days after the end of the World Cup in Qatar, and just over two years after that of Argentine legend Diego Maradona.

Throughout the tournament, the "king" had sent messages on social media from the room of the Albert-Einstein hospital where he had been admitted on November 29, encouraging Brazil or congratulating Messi on his "deserved" coronation when Argentina beat France.

At Christmas time, his daughters posted photos of the almost-entire family gathered around the footballing legend on Instagram, expressing their gratitude as messages of support poured in from around the world.

Last Friday, Kely Nascimento published a moving photo of her tenderly hugging her father lying in his hospital bed. We only saw part of Pelé's face in this photo, as he was wearing nasal cannulas to help him breathe.

The disappearance of Pelé is a huge loss for Brazil, where he is considered a national treasure.

But beyond the numbers, Pelé will be remembered as the "King" who revolutionised his sport, with his eternal number 10 on his back.

This genius dribbler was the forerunner of modern football, with exceptional technical quality combined with extraordinary athletic abilities despite his modest height (1.72 m).

Pelé was also very emotional, as evidenced by the black and white images of the 17-year-old boy bursting into tears after winning the first of his three world titles, in 1958, in Sweden.

And he kept the promise made to his father, eight years after having seen him cry while listening to the radio on the "Maracanazo," the defeat against Uruguay which had deprived Brazil of a first world title in 1950.

In 1970, during the first World Cup broadcast in colour, it was with a radiant smile that the King, at the peak of his art, celebrated the historic treble, with a team that many consider to be the most talented of all time including Rivelino, Tostao or Jairzinho.

The world of football had already held its breath in November 2014, when the Brazilian was placed in intensive care after a serious urinary infection which had required his placement on dialysis.

It was ultimately colon cancer that struck down the "King." Pelé had however remained optimistic throughout his fight against the disease, after the detection of a tumour in September 2021: "I will play this new match with a smile," he said on Instagram.

During his playing career, a broken rib during a game damaged his right kidney, which was eventually removed.

He only had one kidney, but "three hearts", he joked, referring to the name of his hometown, Tres Coraçoes, in the state of Minas Gerais.

Born on October 23, 1940 into a poor family, little Edson had to sell peanuts in the street to help his parents. His first name was chosen in homage to Thomas Edison, inventor of the light bulb.

He signed his first professional contract at the age of 15, with Santos, the club with which he piled up titles, notably lifting two consecutive intercontinental cups, against Benfica (1962) and AC Milan (1963).

On November 19, 1969, when he scored the thousandth goal of his career in the legendary Maracana stadium in Rio de Janeiro, the match was interrupted for about twenty minutes, the time of an interminable lap of honour.

During friendly match tours abroad with Santos or with the Seleçao, he was received like a head of state.

Pelé never yielded to the advances of the big European clubs, but offered himself a last final freelance farewell at the New York Cosmos, contributing to the first, ephemeral rise of "soccer" in the United States, where he put an end to his career, in 1977.

His reign also extended outside the field, with film roles, recorded songs and even a post as Minister of Sports (1995-1998).

Unlike the eternal rebel Maradona, he was often perceived in Brazil as a man close to the establishment, including infamously during the military dictatorship (1964-1985).

Sometimes considered haughty and vain, criticised for certain outspoken declarations, Pelé was not always a prophet in his country, unlike heroes with tragic destinies, such as footballer Garrincha or racing driver Ayrton Senna.