South African president Cyril Ramaphosa vowed to unite the ANC and tackle graft after the ruling party re-elected him for a second term despite a recent scandal.

"We need as we move on to resolve a number of challenges that confront our country, but we also know that we can only confront those challenges if we are a united organisation. If the ANC is divided it will never be able to unite the people of South Africa", said ANC President and future presidential candidate, Cyril Ramaphosa.

The ANC's continued majority in the National Assembly is under threat, given a slump in support.

In the last local government elections, the ANC won less than 50% of the votes cast, a first in a history spanning more than a century.

"We need yes to act with resolve, to ensure that we address the turmoil for instance of load shedding that is taking our economy backwards, we also need to remove the obstacles to faster economic growth and job creation, we need to act against those public representatives and officials who are delaying vital reforms that we need to build, to take to build a thriving economy", promised the current president.

Ramaphosa's victory opens the way for him to win a second term in power if the ANC win the next general election, due in 2024. 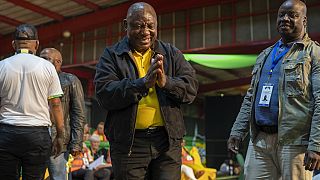