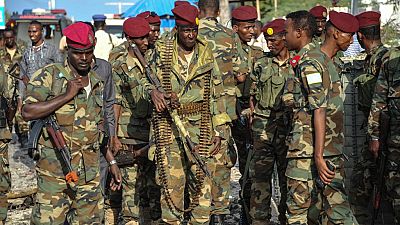 Somalia's President Hassan Sheikh Mohamoud said Monday that soldiers who have been training in Eritrea for months would begin returning to the country in the coming days.

For months, rumours have been circulating in Somalia that these soldiers were sent to the war-torn Ethiopian region of Tigray.

"Before the end of this December they will start to return and in January they will be back," Mohamoud assured a forum organized by the Somali diaspora during his visit to the United States. "We have settled everything on this issue and God willing, we will not have any delay after that."

Mohamoud, who promised to bring the soldiers home during his spring election campaign, visited them at training camps in Eritrea in July.

The families of the soldiers, without news of their loved ones, protested several times this year during the presidency of Mohamoud's predecessor, Mohamed Abdullahi Mohamed, known as "Farmajo," demanding information about their fate.

The UN special rapporteur on human rights in Eritrea, Mohamed Abdelsalam Babiker, last year referred to "reports that Somali soldiers have been moved from military training camps in Eritrea to the front line in Tigray, where they were accompanying Eritrean soldiers" supporting federal Ethiopian forces against the rebels.

At the end of May, Farmajo said his government had sent about 5,000 soldiers to train in Eritrea. He added that their training was completed last year but that he had decided to postpone their return to avoid disrupting the parliamentary and presidential elections.

Ethiopia's federal government and Tigrayan rebels signed a peace agreement on November 2 in South Africa to end a deadly two-year conflict that has created a severe humanitarian crisis in northern Ethiopia.