The Tunisian opposition called on Sunday for President Kais Saied to resign, a day after parliamentary elections were largely ignored by the 9 million-strong electorate.

According to the electoral authorities, turnout stood at 8,8%, the lowest ever in the country.

Others have revealed their disappointment at the lack of investments previously promised by the government.

Despite an abstention rate of more than 91% some feel the results are positive.

"These are acceptable results. It is a normal result. It is not a problem whether it is 8% or 50% or 1%. These are logical and positive results. Sincerely, these are sufficient results", said retired citizen Mohamed Amri.

The ballot for the new 161-seat assembly followed three weeks of barely noticeable campaigning, with no serious debate among a public worried with day-to-day economic survival. 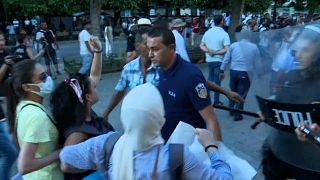