Motorcycle taxis are a popular and cheap form of transportation in West Africa. But increasingly in Benin and Togo, drivers and customers are swapping gasoline-powered motorcycles for electric models that are more environmentally friendly and, above all, less expensive. Oloufounmi Koucoi, 38, company is delivering the models to Cotonou.

In Lome, capital of neighbouring Togo, Octave de Souza parades proudly through the streets on his brand-new green electric motorcycle.

In African cities, pollution caused in particular by heavily clogged road traffic is one of the leading causes of death and a major public health issue. But for many drivers, electric motorcycles are more a question of cost than climate.

**"One of the things we’re concerned about is the charging point issue. In that regard, you can have a stressful drive because you don’t know where to find a charging point so you don’t break down. This sometimes leads us to exchange (batteries) with 10 or 15% of remaining charge so as not to have any bad surprises along the way."**Koffi Abotsi, electric motobike driver

Local authorities also are encouraging the switch to electric in a bid to replace old, highly polluting motorcycles. Many taxi drivers are thus lured by flexible credit or loan deals that they pay off monthly, weekly or even daily.-- instead of making a hefty one-off purchase. 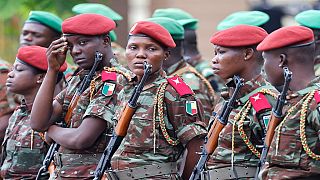