After the two men inspected the guard of honour together, they traveled to Buckingham Palace in a carriage procession escorted by mounted soldiers from the Household Cavalry.

Climate change, trade, and the Commonwealth are expected to be on the agenda in discussions between the two.

Ramaphosa will also visit parliament for an address to both the upper and lower houses, attend a state banquet at Buckingham Palace, and hold talks with Prime Minister Rishi Sunak during his stay.

At the start of the visit, the two governments announced the launch of the next phase of the UK-South Africa Infrastructure Partnership.

‘South Africa is already the UK's biggest trading partner on the continent, and we have ambitious plans to turbocharge infrastructure investment and economic growth together,’ Sunak said.

Britain’s Foreign Secretary, James Cleverly, said the choice of Ramaphosa for Charles' first state visit was a sign of the country's ‘enduring commitment’ to Africa, even as it eyes new partners in Asia. 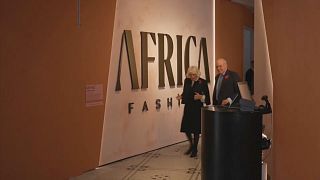