Fela Kuti, who used 'music as weapon', honoured in Paris

The son of Afrobeat legend Fela Kuti spoke of his father's bravery in using "music as a weapon" ahead of an immersive exhibition opening at the Paris Philharmonic on Thursday.

"Instead of picking up a gun, music was the only tool he had. It was a weapon to use against authority, against colonisation and corrupt African governments," said Femi Kuti, 60, himself a hugely successful musician.

The Paris Philharmonic is paying homage to Fela Kuti by recreating the atmosphere of his sweaty, politically-charged nightclub in Nigeria, The Shrine, which became a beacon for global stars in the 1970s including Stevie Wonder and Paul McCartney.

Kuti died from AIDS complications in 1997, but his pioneering work remains as potent as ever, frequently cited by today's stars such as or Flea from Red Hot Chili Peppers, or Beyonce and Jay-Z who sampled his hit "Zombie" on "Homecoming Live".

"I'm not surprised. Great people like Miles Davis already talked about Fela," said Femi Kuti of his father's continued popularity. "Afrobeat was the basic element of hip-hop, it's where hip-hop got its sauce from."

"When we started working on this exhibition project, the Black Lives Matter movement emerged and Fela's fight in the 70s and 80s found resonance there," said Alexandre Girard-Muscagorry, one of the curators of the immersive exhibition.

Kuti was harassed throughout much of his life by the military authorities in Nigeria for his relentless criticism of their corruption and violent misrule.

There was a particularly vicious reaction after he refused to take part in an official music festival in 1977, instead organising a parallel event that became much more popular and attracted international stars including Stevie Wonder.

Soldiers responded to his counter-festival by burning down his home and pushing his mother out of a first-floor window, causing injuries which led to her death a year later, Femi Kuti said.

"He was a voice for the voiceless, the only opponent who was brave enough to tackle the hardcore military dictators at that time and he paid a very high price," said Femi Kuti.

But it was ultimately the genius of his music that made him so popular, creating something entirely new with its mix of free jazz, soul, funk and Yoruba.

McCartney was one of many inspired to come to The Shrine in Lagos, where he recorded his album "Band on the Run".

"Fela came out of Africa with this incredible sound that caught the ears of everybody," said his son.

"To use this music as a political weapon and message -- that caught the attention of the world and especially France, maybe because of the connection to its own rebellions." 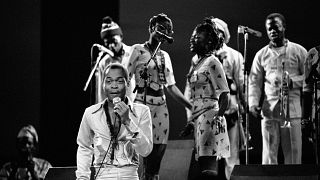 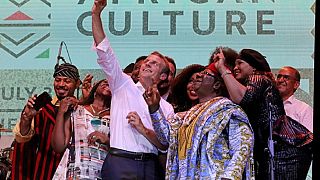