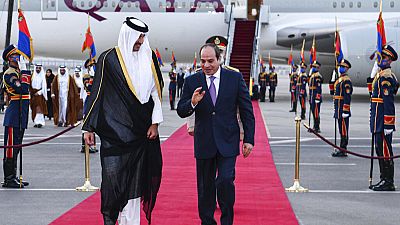 Egypt's president traveled on Tuesday to Qatar on his first visit to the gas-rich nation amid warming ties after years of frayed relations following the Egyptian military's overthrow of an Islamist president backed by Doha.

The two-day trip comes amid a rapid rapprochement between Egypt and Qatar after the end in 2021 of a yearslong boycott of Doha by four Arab states, including Egypt. Qatar's state-run news agency said Egyptian President Abdel Fattah el-Sissi was to hold talks with Sheikh Tamim bin Hamad Al Thani.

In June, Sheikh Tamim visited Cairo, where he was welcomed at the airport by el-Sissi, in a sign of warming ties.

The two countries' relations deteriorated in 2013, when el-Sissi, as defense minister, led the military's overthrow of Egypt's Islamist President Mohamed Morsi following a short-lived and divisive rule. Morsi, who hailed from the Muslim Brotherhood, was backed by Qatar.

In 2017, Egypt joined Saudi Arabia, the United Arab Emirates, and Bahrain in a boycott of Qatar, seeking to force Doha to change its policies.

The rift finally ended in 2021, when Qatar signed a declaration with the four to normalize relations. Since then, ties have improved, and top officials have exchanged visits.