A leading opposition figure in Chad has been summoned for questioning following clashes last week.

Succes Masra is the president of a Chadian party called "The Transformers", the most radical component of an opposition coalition that is boycotting a forum launched by Chad's military ruler, General Mahamat Idriss Deby Itno.

Speaking to supporters outside the headquarters of the party, Succes Masra, said he was standing up for justice and equality.

"It is in the name of justice and equality that we are here standing in the rain this morning", announced the party president.

"It's to go and listen to what they're going to say to us but we're not vindictive, it's not to avenge. Our revenge is the national anthem and the march, that's all. No scuffles", appealed Denemadji, a supporter of "The Transformers" party.

Supporters of Succes Masra gathered in the capital, N'Djamena, before the police fired tear gas to disperse them.

The opposition activist asked his supporters to avoid confrontation with the authorities.

"You have stood up today to help me carry a kind of cross of justice and equality. So I'm going to ask you to be disciplined, not to boil over", added the activist.

General Mahamat Idriss Deby Itno. replaced his father in April 2021 after he was killed in an operation fighting rebels. Deby promised "free and democratic elections" within 18 months. 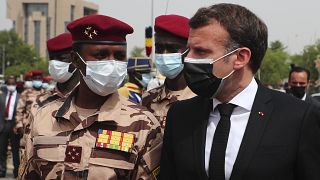