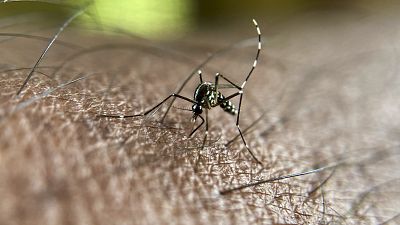 A booster dose of a new malaria vaccine has maintained a high level of protection against the disease, researchers said Thursday, raising hopes that the cheap vaccine could be produced on a large scale in a few years.

The new vaccine offers protection for two years and has been termed as a game changer in the fight against the deadly disease.

The vaccine, developed by scientists at Oxford University, could represent a turning point in the fight against the disease, an international research team said Thursday in the journal "Lancet Infectious Diseases.

Last year, another vaccine, produced by British pharmaceutical giant GSK, became the first malaria vaccine to be recommended for widespread use by the World Health Organization (WHO). It has since been administered to more than a million children in Africa.

But research has shown that the effectiveness of GSK's vaccine is about 60% and declines significantly over time, even with a booster dose.

Oxford's R21/Matrix-M vaccine, meanwhile, was 77% effective in preventing malaria, according to a study published last year. This is the first time a vaccine has exceeded the WHO target of 75% efficacy.

For the study, 450 children aged five to 17 months in Burkina Faso - where malaria accounts for about 22% of all deaths - received three doses in 2019.

They were divided into three groups: two received different doses of the Matrix-M adjuvant, a vaccine ingredient patented by Novavax and also used in the U.S. biotech company's Covid vaccine; the third control group received a rabies vaccine.

Before the 2020 rainy season (when malaria cases increase), 409 children returned for a booster shot.

For the group that received the highest dose of adjuvant, vaccine efficacy increased to 80%, according to results of a phase 2 trial published Thursday. For the lowest dose, efficacy was 70%.

Most importantly, one month after receiving the booster, antimalarial antibodies returned to a level similar to that seen after the first doses received a year earlier, the study found.

"It's fantastic to see such high efficacy after a single booster dose," said one of the authors, Halidou Tinto of the Burkina Faso Health Research Institute IRSS.

Tinto, who participated in the trial of both malaria vaccines, said GSK's vaccine had an optimal efficacy of about 60%. "So I can confirm that R21 is much more effective," he said at a press conference.

"We could be looking at a very substantial reduction in the horrific burden of malaria, a reduction in deaths and disease in the coming years, certainly by 2030," said Adrian Hill, a vaccine specialist at Oxford and co-author of the study.

A 70% reduction in malaria deaths could be achievable within that time frame, he said, in part because of the large number of vaccine doses that could be produced quickly.

Oxford has partnered with the world's largest vaccine manufacturer, the Serum Institute of India.

The institute "is willing and able to manufacture 200 million doses a year starting next year," Hill said. The six to 10 million doses GSK can produce a year is "not enough for 40 million children who need four doses in the first year," he said.

And Oxford's vaccine would probably cost a few U.S. dollars per dose, less than half the $9 for GSK's version, he added.

Results from a Phase 3 trial involving 4,800 participants in four countries are expected later this year, which could potentially lead to approval of the vaccine.