The British government's plan to send asylum-seekers to Rwanda faces a legal challenge in the High Court this Monday.

Human rights groups and labour unions filed a number of lawsuits arguing the policy is both illegal and immoral.

In April the British government announced an agreement with Rwanda under which people who enter Britain illegally would be deported to the East African nation, where they would be allowed to seek asylum. In exchange for accepting them, Rwanda would receive millions of dollars in development aid.

The lawsuits were brought by several asylum-seekers who were targeted for deportation in June, as well as immigrant rights groups Care4Calais and Detention Action, and the Public and Commercial Services Union, which represents border staff who will have to enforce the policy. 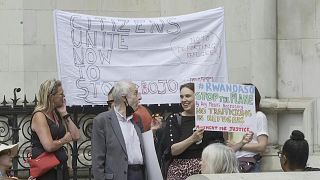