The death toll from flash floods in Sudan since the start of the country's rainy season has so far claimed 83 lives, an official said Tuesday as the downpours continued to inundate villages across the east African nation.

Brig. Gen. Abdul-Jalil Abdul-Rahim, a spokesperson for Sudan's National Council for Civil Defense, said that at least 36 people have been injured since May. More than 18,200 houses have been "completely destroyed" across the country while around at least 25,600 were partly damaged.

The United Nations said more than 146,200 people have been affected by floods. Footage aired by local media shows rising waters submerging villages. Authorities have declared a state of emergency in six of the country's 18 provinces.

The western Darfur region and the provinces of Nile River, White Nile, West Kordofan and South Kordofan are among the hardest hit, according to the U.N. Office for the Coordination of Humanitarian Affairs, or OCHA.

U.N. agencies suffer from significant funding shortages. OCHA said donors provided around $608 million for Sudan's humanitarian response so far this year, less than a third of what is required for this year.

Sudan's rainy season usually starts in June and lasts until the end of September, with floods peaking in August and September. More than 80 people were killed last year in flood-related incidents during the rainy season. 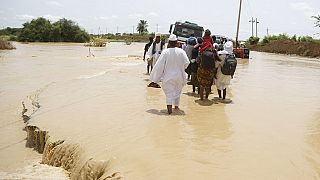