The head of the junta in Mali, Colonel Assimi Goita has appointed another colonel, Minister Abdoulaye Maiga, as interim Prime Minister to replace civilian Choguel Kokalla Maïga, who was hospitalised a few days ago.

"Colonel Abdoulaye Maïga, Minister of Territorial Administration and Decentralisation is designated to ensure the interim of Choguel Kokalla Maiga, Prime Minister, head of government," said a decree read on state television on Sunday.

In addition to the important portfolio of Decentralisation, Abdoulaye Maïga, aged about 40, was also the government spokesman.

Little known before his appointment to this post at the end of 2021, he has regularly made in this capacity in recent months, dressed in his fatigues, on national television some of the most striking announcements of the government and the most abrupt statements against France.

At the end of July, he "demanded" that President Emmanuel Macron "definitively abandon his neo-colonial, paternalistic and condescending posture".

Colonel Maiga is not known to have been part of the circle of officers who took power by force with Colonel Goïta in August 2020. However, he is considered close to the Malian strongman and became the voice of the policy of breaking with France and its allies after a second putsch in May 2021 that removed the civilian president and prime minister.

With the appointment of Colonel Maïga as head of government, the two heads of the executive are, at least temporarily, military. In contrast, the colonels had resigned themselves under international pressure after the 2020 putsch to entrusting the two posts to civilians while retaining control of decisions.

Choguel Kokalla Maiga, a veteran of Malian politics, was chosen to be the head of government after the second putsch in May 2021. He was hospitalised eight days ago after a heart attack, according to a hospital official.

His services had then simply indicated that after "14 months of uninterrupted work, (he had) been put on forced rest by his doctor". They announced his return to work the following week. But there has been no further official news from him since then.

He has been criticised for several months by many political cadres who are calling for his resignation and by many of his former allies in the 5-Jun Movement, of which he is a founder and which played a leading role in the protests that preceded the military takeover in 2020. 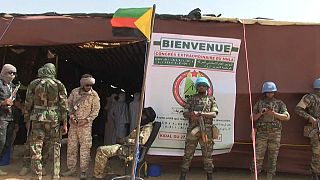