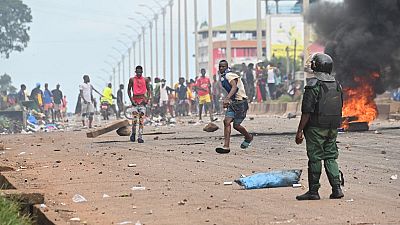 Two teenagers, were shot dead Wednesday (August 17) during protests that saw sporadic clashes and demonstrations against the junta, relatives and the organizing group said.

The National Front for the Defense of the Constitution (FNDC), which had called for the protest, took to social media to accuse the guard of the junta leader, Colonel Mamady Doumbouya, of having shot the two young men (17 and 19 years) as his convoy crossed the suburbs of the capital Conakry, a hotbed of protest.

Police spokesman Colonel Mory Kaba confirmed the junta leader passing during the protest but says he has no knowledge of the incident.

One of the victims, Ibrahima Baldé was killed by a bullet fired by a member of the security forces in Wanidara, a neighborhood in the suburbs of Conakry that has been the scene of clashes, his father Mohamed Chérif told an AFP correspondent.

A relative of the young man, speaking on condition of anonymity alleged the victim was shot by a soldier as the junta leader's motorcade passed through the neighborhood.

Oumar Barry, a 17-year-old high school student, later died in the nearby Koloma neighborhood. "They shot him in the stomach in Koloma, it was 6:50 p.m." (local and GMT), said a neighbor, Pathé Diallo.

Such violence is not new in Guinea. Rights activists have long denounced the excesses of the security forces and the impunity they enjoy.

The FNDC, a coalition of parties, unions, and civil society organizations, called for peaceful demonstrations despite the junta's May 13 ban on demonstrations and its decision to dissolve the group last week.

Sporadic clashes were reported in the suburbs of Conakry. Dozens of youths pelted police and gendarmes with stones on Route Le Prince, a road running through the suburbs and a frequent scene of such confrontations. The security forces responded with tear gas.

The authorities deployed large numbers of gendarmes and police. Various neighborhoods in the suburbs, usually teeming, gave the appearance of a dead city. Many businesses and large markets remained closed for fear of violence.

Demonstrations were reported in the provinces, but the FNDC's call did not appear to be widely followed.

The FNDC orchestrated months of mobilization from 2019 to 2021 against a third presidential term for Alpha Conde (2010-2020), who was finally overthrown on September 5, 2021 by Colonel Doumbouya. The FNDC is now the voice of protest against the junta, as the opposition is considerably weakened.

The FNDC demands a return to constitutional order and denounces the military's seizure of power. The FNDC initiated two days of demonstrations on July 28 and 29, which were banned by the authorities and in which five people were killed.