Two days after the Kenyan electoral commission declared William Ruto winner of the presidential race, Kenyans wait for a resolution of the electoral dispute.

Ruto garnered 50.49% of votes. However, his main rival Odinga rejected the results.

Addressing members of his coalition in Nairobi, Wednesday, William Ruto commended his supporters as he credited them with providing him a mandate broader than Kenya's previous election:  "In 2017, we had 25% in 34 counties, this year, we have won 25% in 39 counties; that broader mandate comes with greater responsibility to every Kenyan. There will be no room for exclusion of any part of the Republic of Kenya".

Ruto spoke to journalists after meeting with members of his political alliance. He declared that his administration "will have nothing to do with the blackmail we have seen, the threats we have seen, the fear sown around the country" amid differing political views. "We are having our democratic country back," he said.

Ruto, Kenya’s deputy president, was declared the winner of last week’s close election on Monday, but the electoral commission publicly split minutes before the declaration. Four of the seven commissioners, who were appointed last year by President Uhuru Kenyatta, asserted that the commission chair excluded them from the final steps before his declaration. Raila Odinga has since called the results "null and void ", vowing to challenge them.

Kenyan president-elect William Ruto says that if there’s a court challenge to the election results, "we will engage in those" as East Africa's most stable democracy awaits a likely petition from losing candidate Raila Odinga. It is not clear on what grounds Odinga would challenge the results in an election widely described by Kenyans and observers as more transparent and peaceful than ever. He has urged his often passionate supporters to remain calm.

"Ours is victory deferred, but it’s coming home," Odinga's running mate, Martha Karua, told journalists Wednesday. "We’ll not let you down." Odinga, an opposition figure in his fifth attempt at the presidency, has said his campaign will pursue "all constitutional and legal options" to challenge the election results. He met with his team behind closed doors Wednesday. They have seven days from Monday’s declaration to file at the Supreme Court, which then has 14 days to rule on it. 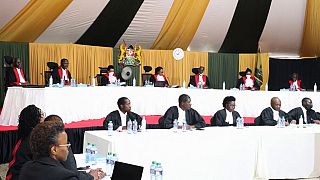