South African President Cyril Ramaphosa has highlighted the fight against corruption and the country's struggling economy.

Speaking during the closing day of the ruling African National Congress party's conference, he said:"All the measures proposed to grow and transform the economy rely on a fiscal policy that ensures that our national debt is contained within sustainable limits and that spending is reprioritized away from consumption towards investment."

The conference also discussed policies needed to address the country's challenges, including the high levels of poverty, 35% unemployment rate and the rising cost of living.

The policy conference, seen as a preview to its elective conference in December where it will elect new leaders, was attended by over 2,000 delegates.

According to Ramaphosa, the delegates also expressed concern about the country's electricity crisis, which has resulted in rolling power blackouts which have affected businesses and households as the power utility Eskom struggles to keep the lights on.

However, the delegates expressed support for the steps the government was taking to address the issue.

The party's contentious step-aside policy which requires leaders accused of corruption to step down from their positions, was endorsed by the conference despite some opposition from rival factions within the party.

"The overwhelming view of this conference is the retention of the step-aside conditions, to enhance the integrity of the movement and its leadership," said Ramaphosa.

The policies agreed on at the conference are expected to be adopted at the national conference in December, where Ramaphosa will be seeking re-election as the party's leader. 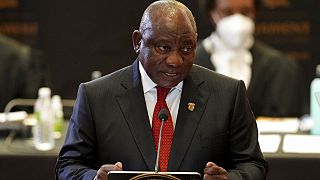