There’s little in contemporary movies quite like the arrival of a new Jordan Peele film. They tend to descend ominously and mysteriously, a little like an unknown object from above that casts an expanding, darkening shadow the closer it comes.

“Nope,” the writer-director’s third film, is nearly here. After Peele’s singular debut, “Get Out,” about the possession of Black bodies and the fallacy of post-racial America, and his follow-up, “Us,” a monstrous tale of doppelgangers and societal mirrors, the closely-kept-under-wraps “Nope” brings a new set of horrors and unsettling metaphors. For Peele, who writes through shooting and considers the conversation generated by a movie one of its main ingredients, “Nope” is far from a finished project.

It’s Peele’s most ambitious film yet, a flying saucer horror that digs into the nature of spectacle and the desire to document it — a multithreaded theme that encompasses Hollywood history and “Nope,” itself. Daniel Kaluuya and Keke Palmer star as a brother and sister in a family horse wrangling business for film productions. Their California ranch is visited by a strange and violent force in the clouds that they strive to capture on film.

“Nope,” which opens in theaters Friday, also extends Peele’s own self-conjured mythology. His movies are very loosely tethered together (some fictional establishments appear in several of them), and now even encompass a “Nope” theme park attraction at Universal Studios Hollywood. Peele’s dark world is increasingly ours.

For Peele, as he said speaking recently by Zoom from Los Angeles, “Nope” is about reaching for a kind of Hollywood movie once unattainable. He pointedly opens the film with Eadweard Muybridge’s 1887 photographic study showing a Black rider on a horse. It was one of the first moving pictures. But while the name of the horse and its owner was recorded, the name of the Black jockey is unknown.

“I feel like this is the first moment that anyone would ever allow me or anyone to make this movie. And so I had to take advantage. I had to go as big as possible,” said Peele. “I was like: ‘Let’s go.’” 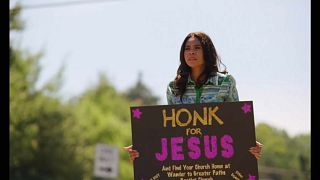