Compaore, 71, flew in from Ivory Coast, where he has been living, for a summit of ex-presidents with the country's new strongman, Lieutenant-Colonel Paul-Henri Sandaogo Damiba, who was sworn in as president earlier this year following a coup.

Compaore's plane landed at the military base in the Burkinabe capital, while dozens of his supporters awaited his arrival at Ouagadougou main international airport.

It is the first time the ex-president has set foot on home soil since he was forced into exile in neighbouring Ivory Coast in October 2014, after violent popular riots broke out against his plans to remain in power after serving as president for 27 years.

Compaore had seized power in a coup in 1987, on the same day that Burkina's revolutionary leader Thomas Sankara -- his former comrade-in-arms -- was gunned down by a hit squad.

His return home on Thursday is not a permanent one. He has been invited to stay for a few days by Damiba, the leader of a coup in Burkina Faso in January.

Along with the other remaining former presidents of Burkina Faso, Compaore is due to take part in a meeting to "accelerate national reconciliation" in the face of the jihadist attacks that have been plaguing Burkina Faso since 2015 and have multiplied in recent months.

In April, Compaore was sentenced in absentia to life imprisonment for his role in the assassination of his predecessor Sankara in 1987. 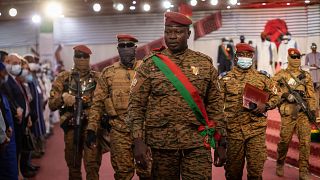