South Africa's President Cyril Ramaphosa on Wednesday (June 22)  received the last of a series of damning reports from a four-year investigation into state corruption during his predecessor Jacob Zuma's presidency.

"This report is an opportunity to break decisively with the era of state capture," Ramaphosa said at the official handover in Pretoria.

The head of state said he would announce his decision on whether to follow the commission's recommendations in four months to parliament.

Judge Zondo has already called for the prosecution of more than 130 people, including former ministers.

Former president Jacob Zuma, on parole after being sentenced to 15 months in prison for refusing to testify before the commission of enquiry set up in 2018, is accused of organising the looting of state coffers for the benefit of a circle of politicians and powerful businessmen of Indian origin, the Gupta brothers.

More than 300 witnesses were heard, and nearly 1,500 people were questioned by the commission, whose final report is more than 5,000 pages long. The first volume was published in January.

Mr Ramaphosa has made the fight against corruption one of his main concerns. However, he too was called to testify before the commission. He had estimated that more than €30 billion (R500 billion) had been embezzled.

The report's findings come as the president is in turmoil over corruption allegations surrounding an embarrassing 2020 burglary at one of his properties, in which large sums of cash were found hidden in furniture. 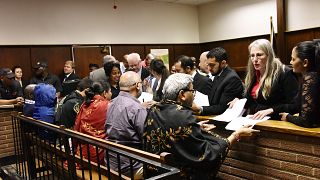