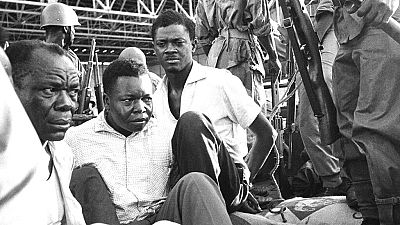 Patrice Emery Lumumba, whose relic was given to his family by Belgium on Monday, became a legend on 30 June 1960, with a speech against the racism of the colonists that made him an icon of African independence.

"We have known the ironies, the insults, the blows that we had to suffer morning, noon and night because we were negroes," he said in Kinshasa at the official ceremony marking the birth of the Democratic Republic of Congo.

The first Prime Minister of the independent Congo was responding to Belgian King Baudouin, who had just praised the "civilising" work of his ancestor Leopold II.

Patrice Lumumba was born on 2 July 1925 in Onalua, in the province of Sankuru, to parents of the Tetela ethnic minority in central DRC.

He first studied to be a nurse, then joined the colonial school of the post, telephone and telecommunications from which he graduated as an accountant at the postal cheques office in Stanleyville (later Kisangani, in the northeast).

Remains of father of Congolese independence to return to the DRC https://t.co/sSvIpw09Kr

Accused of embezzlement in 1956, he was sentenced to several months in prison. "He never denied embezzling money," says Congolese philosopher Emmanuel Kabongo, a professor at the National Pedagogical University (UPN) in Kinshasa and author of several publications on Patrice Lumumba.

When he was released from prison, "thanks to his relations with Belgian liberals", he was hired as commercial director of the famous "Brasserie de Léo et du Bas-Congo", which wanted to boost sales of its Polar beer in Kinshasa and its surroundings, explains philosopher Emmanuel Kabongo.

In 1958, he created his party, the Congolese National Movement (MNC), which advocated unitarianism and the secular nature of the Congolese state and was directly involved in the fight for independence. He was immediately accused of being a "communist" by his detractors. "He was not a communist. He repeated several times that he was a nationalist and not a communist," says Congolese academic Jean Omasombo.

From 20 January to 20 February 1960, Patrice Lumumba took part, along with other Congolese political leaders of the time and traditional chiefs, in the work of the Brussels round table which decided on the independence of the Belgian Congo on 30 June 1960.

His political grouping having won a majority in Parliament, he was appointed Prime Minister and formed the first government of the independent Congo, composed of 31 members. But "he was only head of government of the new state for two months and 13 days", from 30 June to 12 September 1960, recalls Professor Kabongo.

His government was neutralised by President Joseph Kasa-Vubu and army chief Joseph-Désiré Mobutu, who installed Commissaires-General, a government made up essentially of students and the few Congolese academics.

Arrested, deposed, humiliated and tortured, the martyr of Congolese independence was executed in the middle of the bush 50 km from Elisabethville (now Lubumbashi, south-east) by Katangese separatists and their Belgian henchmen. He was 35 years old. Patrice Lumumba's meteoric rise thus came to an end on 17 January 1961, six and a half months after his resounding speech to King Baudouin.

This speech "certainly sealed his fate, but it should also be noted that his nationalism and his closeness to pan-Africanist icons such as former Ghanaian president Kwame Nkrumah and Tunisian Habib Bourguiba had disturbed American interests in the Congo," concludes philosopher Kabongo.