Sudan’s leading general lifted, Sunday, a state of emergency that was imposed in the country following the October coup he led. The country experienced over the weekend yet another day of protest against the military coup.

The ruling military authorities in Sudan lifted Sunday the state of emergency imposed since the October military coup and recommended the people detained under an emergency law shall be freed.

The news came the same day as the U.N. envoy for Sudan regretted the killing of 2 anti-coup protestors in Khartoum Saturday. The two were killed in during protests in Khartoum’s Kalakla neighborhood.

One was shot dead by security forces and the other suffocated after inhaling tear gas, according to the Sudan Doctors Committee, which is part of the pro-democracy movement.

"Calling for the violence to stop", Volker Perthes urged the authorities to engage in a "peaceful way out of the crisis".

Saturday’s protests were part of relentless demonstrations across the country. Hundreds of people marched in the capital demanding the return of constitutional order. Medical groups say nearly a hundred demonstrators were killed since the protests began late last year.

The lifting of the state of emergency comes after repeated calls by local groups and foreign governments.

Some observers analyse the move as a way for the authorities to show willing for dialogue.

Protesters demand the removal of the military from power. The generals, however, have said they will only hand over power to an elected administration. They say elections will take place in July 2023 as planned in a constitutional document governing the transition period.

The U.N., the African Union and the eight-nation east African regional group called the Intergovernmental Authority in Development have been leading concerted efforts to bridge the gap between the two sides and find a way out of the impasse. 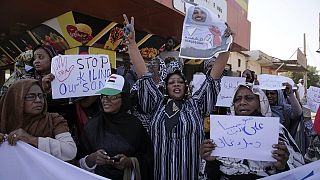