After the first season marked by the Covid-19 pandemic, the Basketball Africa League (BAL) began on solid ground. First in Dakar and then in Cairo. The two elimination tournaments already began on a high note. The final phase will be held in Kigali, Rwanda.

"The feedback we have received after these two stages are very positive and then a lot of commitment at the level of supporters, everyone. Matches are broadcast in 215 countries around the world and hundreds of millions of fans are engaged through social networks and our digital platforms. It's encouraging. There's still a tremendous amount of work to be done but, in any case, we continue to see very encouraging signs," said Amadou Gallo Fall, the President of Ball.

These are encouraging signs but above all a strong signal to all African countries. According to the president of BAL, the gains for the continent remain enormous and still haven’t been exploited.

"First, the motivation that many countries will have is to accelerate the construction of multifunctional infrastructure of this kind and the development of an industry around the sport. And this industry will obviously generate income but also create jobs, especially for young people and also start to integrate women into the sports industry," said Amadou Gallo Fall, the President of Ball.

This integration targets people of all gender and youth that embodies the future of continental basketball and aims to take full advantage of the benefits of this sport.

"It is an industry that generates billions and billions of dollars worldwide but Africa’s share is still tiny. Therefore, the opportunity we have is precise that Africa can be much more respectable as Africa is the largest provider of talent," said Amadou Gallo Fall, the President of Ball.

For the president of the BAL, this means keeping a large majority of these talents on the continent. Their aim is to place Africa at the center stage of world basketball. 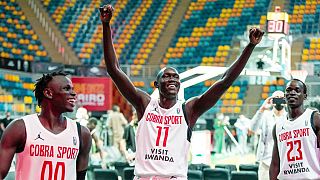 BAL 2022: Cobra Sports make their first win in the competition

BAL 2022: Cobra Sports make their first win in the competition