Snails have long been considered a delicacy in countries such as France.

In Africa, giant African land snails are increasingly seen as a potential source of food as well as income for farmers.

Snails contain protein, iron, calcium and vitamin A, as well as being low in fat. However, like prawns, are also high in cholesterol.

"Most of our farmers are mainly looking for alternatives to either addressing the high rates of fertilizer costs, higher rates of inputs that are really using their cost of production, and therefore use of snails which is less capital intensive with high value products that generate more money seems to be an attractive point to most of these farmers", argues Paul Kinoti, food technologist at Jomo Kenyatta University of Agriculture and Technology.

Land snails are ideal to farm because they're easier then cattle to look after.

Food experts believe that snail farming is a sustainable alternative to rearing other animals which produce methane that contributes to climate change.

Many farmers are realising the economic benefits.

"The cost of this investment is roughly $1500. The size that I am using currently is 60 feet by 30 feet. Considering like if it was cattle, it would be roughly 4 cattle. So it is economical" said snail farmer, Rose Kabura.

Kenya has both land and sea snails. In certain coastal areas, sea molluscs also provide a rich source of protein during the drought season. Many resort to these to replace vegetables.

"We really love this food as it is very useful during drought whenever we cannot find vegetables.We do not struggle to find an alternative to vegetables as we use this meal to feed our children as days pass by", said Zulfa Subira, a sea snail harvester.

Farmers are increasingly exporting the snails to international markets such as Dubai where there is demand for snail meat and their slime often used in beauty treatments. 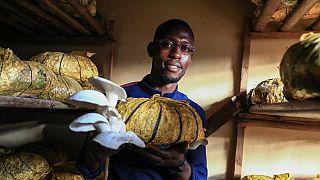