Angolan coffee is a brew long coveted by aficionados around the world. In the 1970s, around a quarter of a million tonnes of this original Angolan black gold was produced a year. This was interrupted by civil war, but now after nearly 20 years of peace, Angola is bouncing back and two Angolan companies are expanding into the global market once again. Their goal is to regain Angola's standing as one of the world's top coffee exporters. The companies, Café Cazengo and Fazenda Vissolela are trying to do this by expanding in the historical coffee-producing areas of Angola.

Researchers say Café Cazengo is one of the most dynamic producers in the agricultural heartland east of the capital, Luanda. One of the main towns in this coffee country is Quiculungo.

Camila Paula, the commercial director at Café Cazengo, explains that in colonial times coffee was what moved Angola's economy and Quiculungo was really built around coffee. Camila Paula is from coffee giant Brazil and it was a Brazilian who started Angola's first commercial coffee plantation in the early 19th century.

Café Cazengo, however, was created by Mr Miguel, an Angolan whose family had been coffee farmers for generations prior to Angola’s war for independence. He created the company in 2010 and there are currently 500 coffee growers working for him, providing the raw material. The majority of the company's production is sold to the United States, but it also has a website and they are able to sell their coffee elsewhere.

Café Cazengo's 500 growers are among 25 000 smaller farms producing about half the country's coffee crop. Around 500 larger commercial farms produce the rest. Camila says Café Cazengo works with growers to boost productivity and improve their lives. They even have an Angolan higher education centre project which is helping coffee farmers to formalise their cooperatives.

Producers are also getting help from an EU-UN programme that's part of an effort to scale up the private sector and diversify Angola's mainly oil-based economy. Agriculture, which represents around 13% of the country's GDP, is key to that.

Fazenda Vissolela is one of those larger commercial farms. It covers 5000 hectares, 1000 of these are for its coffee project. According to its general manager, Guilherme Diniz, these coffee crops are "all focused on specialty coffee". 100 hectares are expected to be dedicated to every variety of Arabica coffee and 80% of these coffees will be exported.

Why is Angolan coffee so good?

A combination of factors makes Angola ideal for the crop. Diniz explains that for a good quality coffee bean you need altitude. Fazenda Vissolela is at 1200 to 1300 above sea level "and that's excellent for quality," he adds.

Compared to other parts of the world, Angola benefits from geography and natural resources that are key to coffee-growing, like an abundance of water to help with irrigation and topography that facilitates mechanisation. Diniz argues that this all leads "to increased productivity."

Énio Miranda, the managing partner at Fazenda Vissolela says that this productivity has already given them a good turnover this year. He expects to double this turnover next year and in the years to come. "This year is the beginning of a bright future. (...) coffee is the future, it has been our past, but now it will be the future of Angola", he explains.

Analysts also see great potential, including the French-based agricultural research group Cirad. Their EU-backed research involved experts from Angola, Argentina, Portugal and France. Cécile Bessou is an agroecology researcher for the group. In her eyes, "there is real government motivation both from local government, but also from international institutions like the European Union, to revitalise this sector with the help of some locals". She describes these locals as dynamic and really trying to be innovative to get Angola's coffee sector "back to its former glory."

Angola's commercial coffee bean production was up by 34% in 2019-2020. The country's new agricultural technologies and a conquering flavour are bringing Angolan coffee back for good. 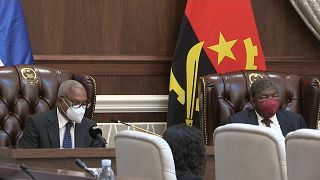