Kenyan motorists endured another day of major fuel shortages on Monday, with hours-long queues and strict rationing at petrol stations as pumps across the country ran dry.

The government blamed hoarding and panic buying for the snaking lines at bowsers that worsened over the weekend, but oil dealers said they were owed outstanding subsidy payments from the state.

"If you know any gas station in your area that has fuel, comment with name, location, available fuel," the Motorist Association of Kenya said on Twitter in a public appeal to ease congestion at pumps.

"Help spread this message, help a stuck motorist." At many locations in Nairobi and elsewhere, motorists able to find petrol after many hours in line with cars, motorcycles and minibuses were limited to a rationed amount.

The crunch began last week in Kenya's west following a row between oil marketing companies and the government over subsidy payments, sources said. The government pays oil providers to subsidise costs at the pump for motorists, but these companies said they were waiting on four months of outstanding payments.

The Energy and Petroleum Regulatory Authority (EPRA) said at the weekend that the government was working to settle all arrears owed to dealers.

But the government blamed hoarders for the shortfall and insisted it had sufficient reserves to supply the East African nation of nearly 50 million.

Kenya consumes nearly 400 million litres of petrol and diesel every month, according to government data.

"Our global stock holding is adequate to serve the region, with more ships queued in Mombasa for discharge," the state-run company said in a statement.

EPRA said the shortage was also exacerbated by "changing supply dynamics" on international markets worsened by the invasion of Ukraine.

There are fears the fuel crunch could see public service providers jack the cost of fares and add to cost of living pressures. 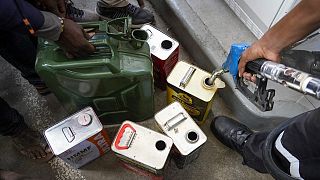