Nhlanhla "Lux" Dlamini, leader of South African anti-immigrant vigilante group Operation Dudula, has been released on bail after his arrest on March 24 on charges of housebreaking, theft and malicious damage to property.

The leader of the movement which demands the prioritisation of the interests of South Africans appeared in the Roodepoort Magistrates’ Court for his bail application on Monday.

Dlamini in reaction to his release thanked his supporters "I want to thank the young people - who are very capable of expressing their youth and being extremely violent in this difficult time - for displaying high and maximum discipline and high morale."

All roads leading to the court were barricaded with steel mesh fencing and the court precinct was surrounded by a large police presence as it anticipated possible clashes with political opponents.

"We maintain that there is no case here, because you cannot do housebreaking and damage the property when you are in the company of the police. This is a politically motivated arrest and incarceration." said Kenny Kunene, a politician at the rally after the bail grant.

"We cannot have illegality running rampant in our society, it has got nothing to do with xenophobia. We have a system, inherited from the previous system, don't worry, from the previous apartheid regime, where illegality - as long as it is condoned by politicians - is fine." activist Liyanda Lekalake.

Since January, demonstrations called "to fight for the future of South Africans" and against migrant workers have been held regularly in several cities. Protesters have visited shops to demand that foreign employees accused of "stealing" South Africans' jobs be fired. These rallies have so far led to tension but not violence.

Dlamini's arrest drew criticism from members of his movement, who used social networks and social media to threaten to intensify their activities.

South Africa is periodically plagued by xenophobic outbreaks. Sixty-two people were killed in riots in 2008.

Violent clashes broke out in 2015, 2016 and again in 2019. The country has 3.95 million foreigners out of nearly 60 million inhabitants, according to official statistics. 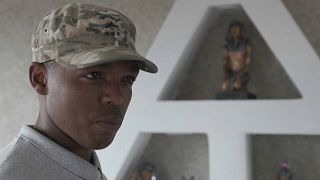