Thousands of protesters took to the streets of the Sudanese capital, Khartoum, on Monday to denounce the October military coup that plunged the country into further turmoil.

Some of the demonstrators picked up the canisters and hurled them back at security forces.

"We are calling for the release of all detainees in jail cells," activist Othman Ali said.

Monday's rally was the latest in a series of protests over the military takeover that removed the civilian-led transitional government.

The takeover has upended Sudan's short-lived transition to democratic rule after three decades of repression and international isolation under autocratic President Omar al-Bashir.

The country has been on a fragile path to democracy since a popular uprising forced the military to remove al-Bashir and his Islamist government in April 2019.

Pro-democracy protesters call for the establishment of a fully civilian government to complete the now-stalled democratic transition.

The generals however insist that they will hand over power only to an elected government. They say elections will take place next year. 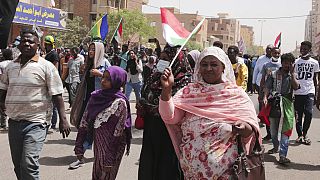