Algerian coach confident ahead of matches against Cameroon

Algeria head coach Djamel Belmadi has called the upcoming two-leg World Cup qualification tie against Cameroon: "the most crucial for the desert warriors.

The ten remaining African teams will battle in March for the continent's five places at this year's World Cup, with the Algerians visiting Cameroon on 25th March before hosting the 'Indomitable Lions' four days later.

"What matters to me now is the Cameroon national team. By the way, for me - and I take this opportunity to say it - it is the most important two matches - I'm not afraid to say it - in my career as a player or as a manager. I have never played at a World Cup and I am a bit selfish here, but it's a selfishness that everybody will share because it is not for me only but for the whole nation. They are the most important matches of my life."

He added, "The main goal is the World Cup. The players know that. They are always thinking about it. Every day it is on their minds. We are thinking always about what they are thinking. We have recovered and will prepare."

The pressure on Belmadi to lead his side to Qatar intensified after Algeria's defence of their Africa Cup of Nations came to a premature end in the group stage of this year's tournament in Cameroon. 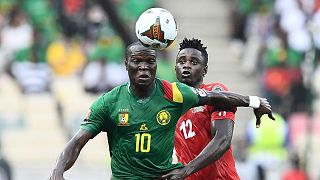