Baerbock made her comments in Cairo, on Saturday, during a joint news conference with Egyptian Foreign Minister Sameh Shukry.

She stated that the German embassy in Kyiv will remain open but with a reduced number of staff deployed.

She added that the German Foreign Ministry has issued a travel warning for Ukraine and that "Germans staying there are asked to leave the country or to consider doing so".

Germany's call to for citizens to evacuate followed the US announcement to evacuate its embassy in the Ukrainian capital.

Baerbock also said that human rights criteria will be at the center of her new government’s international arms sales, including to Egypt, a major importer of German weapons.

She said a bill being introduced this year will also impose restrictions in order to ensure that weapons will not be sold to crisis-hit areas except in exceptional circumstances, and with a justification.

“The human rights situation already plays an important role here,” she said, adding that “this will also have an impact on countries that have so far been major recipients of German arms exports.”

She did not elaborate on the mechanisms that will determine this.

The Egyptian government has in recent years waged a wide-scale crackdown on dissent, jailing thousands of people, mainly Islamists but also secular activists who were involved in the 2011 Arab Spring uprising that toppled the country’s longtime autocrat Hosni Mubarak.

Shukry said Egypt’s defense is vital to Europe, especially in preventing migration to Europe via the Mediterranean.

Since 2016, the Egyptian navy has acted to prevent the launching of such migrant boats to Europe, an action he said was “important to our European partners.”

Egypt will simply seek other sources of armament if Germany decides to restrict arms sales to it, he added.

Germany exported a record 9.35 billion euros ($10.65 billion) of weapons last year, of which some 4.3 billion euros in sales went to Egypt, mostly for maritime and air defense weapons.

Most of that was authorized by the previous German government of former Chancellor Angela Merkel. 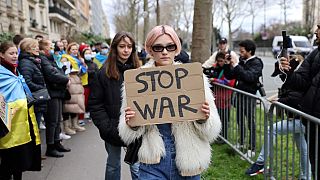