The Lions did roar on Saturday, January 29.

The Cameroonian squad opened the quarter-final session as they met with Gambia, the Little Thumb of the last 8 round. It is before an appreciative audience that the Indomitable lions played their last match in the economic Capital, Douala.

Karl Toko-Ekambi, was the man of the game. The striker of the French club Olympique Lyonnais scored two times and led Cameroom to a two-nil win.

If disappointment was visible as Gambian players exited the pitch, their consistency and their selfless performance throughout their very first continental tournament made their Coach proud and earned their opponents' respect:   "We are really proud of the performance we put up tonight because we knew it was going to be a difficult team up front, that was waiting for us and, with players who would try to stop us from playing as we wished, scorer Karl Toko Ekambi said.** I think we were patient, we had chances in the first half, their goalkeeper made good saves, but we came back well in the second half, we were able to score those two goals that killed the game and we managed it, we are proud to be in the semi-finals.**"

Hours after the Cameroonian qualified, the stallions of Burkina Faso achieved qualification for the semi-final with a one-nil win against Tunisia. A joy for an entire country who has been living troubled times.

The winner of the match Egypt-Morocco will play Cameroon on February 3rd. 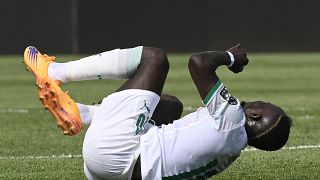