Tunisian police used tear gas and water cannons on Friday against hundreds of demonstrators who defied a ban on gatherings to protest against President Kais Saied's July power grab.

As the country marks 11 years since the fall of late dictator Ben Ali, hundreds of Saied's opponents staged rallies against his July 2021 move.

They had gathered despite restrictions imposed on Thursday, ostensibly to prevent the spread of the coronavirus pandemic.

Around 300 protesters gathered on Mohamed V Avenue, where some broke through a police cordon before being forced back by police with batons.

Security forces had deployed heavily to block them from reaching the central Habib Bourguiba Avenue and the Interior Ministry headquarters, where vast protests in early 2011 had forced Ben Ali to flee to Saudi Arabia.

Some of the protesters on Friday chanted "down with the coup!", a reference to Saied's July 25 moves in which he sacked the government, froze parliament and seized an assortment of powers.

He has since virtually ruled by decree, to the outrage of his opponents, including the powerful Islamist-inspired Ennahdha party.

Some Tunisians, tired of the inept and graft-ridden parliamentary system, welcomed his moves.

But for Ennahdha supporters, they are reminiscent of Egyptian President Abdel Fattah al-Sisi's crackdown on the Islamist opposition, which left hundreds dead in 2013 and thousands imprisoned since.

"You're working for Sisi and the United Arab Emirates!" one woman told a policeman.

The protests took place despite a string of measures including a nighttime curfew and a ban on public gatherings, brought in on Thursday evening purportedly to tackle a steep rise in coronavirus infections.

Ennahdha has said the measures are politically motivated. 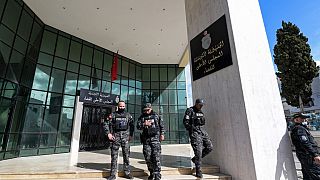