China voiced its opposition to unilateral sanctions on Eritrea during a visit Wednesday by its foreign minister to the Horn of Africa nation.

The United States slapped sanctions on Eritrea last year over the brutal conflict in neighbouring Ethiopia, a move Asmara branded "illicit and immoral."

Eritrean and Ethiopian forces have been accused of carrying out rape and massacres in the war-hit northern region of Tigray, and Washington has repeatedly urged Asmara to withdraw its troops.

"Both sides agreed to uphold the common values of peace, development, fairness, justice, democracy and freedom for all mankind, and oppose hegemonic interferences in the internal affairs of other countries under the pretext of democracy and human rights," said a joint statement by the two foreign ministers.

"The Chinese side stands against any unilateral sanctions on Eritrea," it said, adding: "The Eritrean side reaffirms adherence to the one-China principle."

Wang's trip to Eritrea, one of the world's most closed-off countries, will be followed by visits to Kenya and the Comoros.

To the dismay of the West, China has ramped up its involvement in Africa in its search for resources and has embarked on an infrastructure-building blitz under the so-called Belt and Road investment strategy.

China is the continent's largest trading partner with direct trade worth over $200 billion in 2019, according to official Chinese figures.

Eritrea in November joined several dozen other African nations in signing up to the Belt and Road Initiative.

Chinese foreign ministry spokesman Zhao Lijian said last month that Wang's regional trip aimed to deepen cooperation with the African countries and support them "in defeating the pandemic and bringing about economic recovery at an early date."

At an Africa-China summit in Senegal in November, Beijing pledged to offer one billion Covid-19 vaccine doses to Africa and help African countries overcome pandemic-related economic woes "without imposing its will". 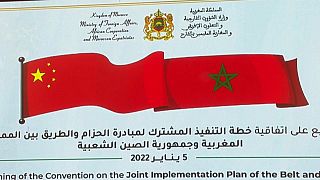