Many Sudanese opposed to military rule regularly demonstrate to denounce the coup d'état led on October 25 by the head of the army, General Abdel Fattah Al-Burhane, and to demand the handover of power to civilians.

"The people are stronger" or "civilian is the people's choice," chanted protesters on Monday, waving Sudanese flags.

According to witnesses, demonstrators were also marching in the eastern states of Kassala and Gadaref.

"Demonstrators are gathered in the center of the city and chanting 'no to military rule,'" Mohammad Idriss, a resident of Kassala town, told AFP.

A resident of the town of Gadaref, Amal Hussein, said there were some 600 demonstrators, waving the Sudanese flag and calling for civilian rule.

Since the October 25 coup, 44 protesters have been killed and hundreds injured, including by bullets, according to a pro-democracy doctors' union.

On that day, General Burhane had most of the civilians who were running the country with him arrested.

On November 21, he signed an agreement with civilian Prime Minister Abdallah Hamdok, who was then able to leave house arrest and return to his post.

The new agreement between General Burhane and Mr. Hamdok has been denounced as a "betrayal" or even a "return to the old regime" of military-Islamist General Omar al-Bashir by the demonstrators who continue to protest.

The authorities have promised a civilian government but it has not yet been announced. 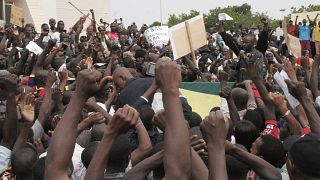