As part of the fight against the recruitment of children into armed groups, several small children aged between 8 and 12 are encouraged to invest their efforts in agricultural activities.

In Goma, North Kivu, East of the Democratic Republic of Congo, a Scouting group, young scouts has shown an example of a field activity that they maintain on a small area. Two months later, results on the ground are visible.

Harvest of amaranths sown a few days ago has been made.

"The objective of these activities that we are doing is precisely to provide a framework for the youth so that they cannot be enrolled in armed groups, but also to provide them with a basis that can help them in the future. With the activities of the MAZIGIRA BORA programme, we are creating vegetable gardens in the city of Goma and also outside the city …" Safari Joseph Young Scout and children's coach said

Although the idea is to extend the initiative throughout the province, the group through their "Clean Environment" programme deplores several losses of fields and seeds that were affected by the recent Nyiragongo volcano.

A young scout, Kayna Paluku added, "With the recent eruption of the Nyiragongo volcano, we have lost three areas in the territory of Nyiragongo, these areas were fields that had already been exploited and today we have nothing left".

An initiative welcomed by the provincial council of Congolese youth, which also deplores the lack of involvement and support of these young people by the Congolese government.

Provincial Youth Council in DRC, Jean Paul Mzee Katenge explained: "...he should normally ask young people the question, what they want, because young people have ideas and initiatives but they do not have the support of the government…"

The East of the DRC has been confronted for more than two decades with a number of armed conflicts.

These largely employ young people, often recruited from local communities, in activities that make their own communities insecure. 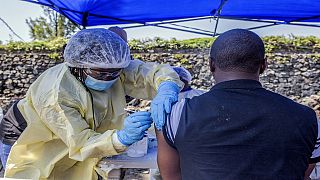