For five days the capital of Niger vibrated in glamour and beauty as the International Festival of African Fashion, FIMA, held its 13th edition.

About fifty top models and thirty fashion designers showcased clothes, accessories and jewellery from all over Africa.

Alphadi, the founder of FIMA has always given a very important place to young people in the fashion industry.

Founded in 1998, almost half of the program of this event is dedicated to young African talent.

Dozens of designers took part in the young designers' competition.

Sun Alejandro, a Rwandan designer based in Gabon, was inspired by the diversity of the Bantu culture - the population of Central and Southern Africa.

"This collection is a little bit of tribal code because I love Bantu culture which I find very rich. That's why we find panther prints on most of these clothes which is an animal very representative of Gabonese culture and which symbolizes strength", said designer Sun Alejandro.

The Top Model contest is always eagerly awaited by the public.

About twenty young men and women participated in the contest.

The event represented an opportunity for beginners like Erudie Deberry from Benin who amazed the public.

The public of Niger, a predominantly Muslim country, is very tolerant of other African cultures where the female body is widely shown.

The designers of Niger however remain very attached to the culture of Islam like sisters Adama and Aicha Seyni Seydou, creators of the brand Mam'Mode.

"The female body is something very precious, it's a treasure in fact. Through our clothes twe try to highlight this body and at the same time respect the local culture", explained the sisters.

FIMA will come back to Niger in full splendour as usual in 2 years. 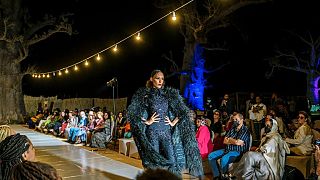