Israel's Defence Minister Benny Gantz departed for Morocco Tuesday on a "historic" visit aimed at bolstering ties between the countries, at a time when Rabat is embroiled in a standoff over Western Sahara.

The two-day trip comes less than a year after Morocco normalised ties with Israel in a deal brokered by former US President Donald Trump.

In return, Washington recognised the North African kingdom's sovereignty over the disputed territory of Western Sahara.

Before departing, Gantz -- the first Israeli defence minister to make an official visit to Morocco -- said he would sign defence "cooperation agreements" with Moroccan counterparts and "continue to strengthen ties".

The trip aims to "set the foundation for all future security cooperation between Israel and Morocco", a source familiar with the visit told AFP.

"Until now there has been some level of cooperation; this truly formalises it," the source added.

Morocco controls most of Western Sahara and considers the former Spanish colony part of its sovereign territory.

Earlier this month, Algiers accused Rabat of killing three Algerian civilians on a desert highway, raising fears of an escalation.

Bruce Maddy-Weitzman, an Israeli expert on Morocco, said the timing of Gantz's visit and the signing of an MOU was not a coincidence.

"It's possible that in the context of the Moroccan-Algerian tensions, the Moroccans were the ones who were keen on this," he said.

"It would seem to me that the Moroccans are the ones who are keen on showing everybody –- their own public, their Algerian rivals, the West -- that they are deepening their relationship with Israel," said the Tel Aviv University professor.

Morocco and Israel previously set up low-level ties in 1993 but Rabat broke them off at the start of the second Palestinian intifada, or uprising, in 2000.

Rabat normalised ties with the Jewish state last December, shortly after similar announcements by the UAE and Bahrain.

Last month, Israel's Ratio Petroleum announced an agreement with Rabat on "exploration operations" off the city of Dakhla in Western Sahara.

One Israeli product, the NSO's Pegasus spyware, has already made its way to Morocco, according to Amnesty International and Paris-based organisation Forbidden Stories.

Rabat allegedly used it against French President Emmanuel Macron -- a claim denied by Morocco which said it never bought the software and has filed lawsuits against French media and Amnesty International.

A spokeswoman for Gantz would not comment on NSO.

The Israeli-Palestinian conflict continues to mobilise civil society, Islamists and the far-left in Morocco, with a call for a November 29 demonstration against "creeping normalisation with Israel" and in support of the Palestinians.

According to Maddy-Weitzman, while Rabat has not abandoned the Palestinian cause, "there are too many other interests in play, too many other benefits to be gained by recalibrating".

"Most of the countries in the region just don't want to be held hostage anymore on the issue, they want to pursue their interests as they define them, and at this point in time obviously Israel has a lot to offer," he said.

While in Morocco, Gantz is due to meet senior defence and foreign ministry officials, as well as visit a synagogue. 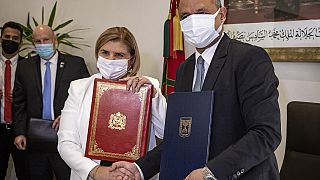