About 30 civilians have been killed in Drodro, Largu and other nearby villages in Djugu territory and Ituri province during attacks attributed to Cooperative for the Development of Congo militant group between November 21 and 22.

According to locals, the CODECO militia targeted a site hosting internally displaced persons in Drodro and part of the village’s parish, setting ablaze several shelters as military teams were slow to respond.

The site manager say, 18 bodies were found. The army said 12 civilians were killed and nine attackers were neutralized. Other local sources say that the death toll is likely to be higher, with around 30 people dead, including militiamen.

The chief of the North Behma area nearby, Willy Pilo Mulindro, said there was significant material damage done in the attack and the toll is provisional.

“Those who were searching for bodies fled the sounds of bullets. They have not yet returned to the scene because of what was done, “ he said.

A civil society leader, Charite Banza, said at least 22 bodies have been recovered and the Catholic Church in Drodro was ransacked.

The U.N. peacekeeping mission in Congo said at least 16,000 people fleeing the violence have taken shelter nearby at a site protected by peacekeepers.

After the intervention of the army, a corridor was finally opened allowing civilians to reach Roe where a temporary base of the UN mission is located. Thousands of civilians were escorted and secured by the peacekeepers.

Last week, Kivu Security Monitor said at least 1,137 civilians were killed in North Kivu and Ituri since President Felix Tshisekedi proclaimed a “state of siege” in the two restless provinces in May. 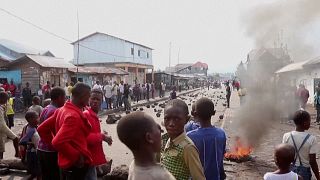