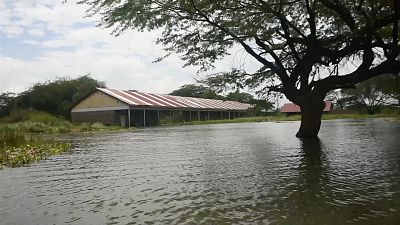 When the water levels in Lake Baringo in the Great Rift Valley started rising, the neibouring community thought that it would finally recede. The situation however turned catastrophic when homes, schools and places of worship were submerged by the rising waters.

"The water levels came up gradually and we also moved every time the water reached our homes. The water level kept rising till we were permanently displaced." says Griffin Nakure.

A number of people were displaced in the process forcing them to retreat to camps where they lived with the difficulty of accessing basic needs and clean water.

Access to some of the IDP camps located in higher grounds is through use of boats. The people are therefore threatened by a couple of dangers including being attacked by crocodiles

The iconic Soi Safari Lodge was one of the buildings that was submerged while Baringo Mixed Secondary School on the other hand was relocated after the entire school compound was submerged.

Life in the camps for the internally displaced people has been a tasking one with some remaining with nothing to depend on.

This occurrence surprised the community because as much as they can remember in their entire life time, the lake had never overflown to that extent.