Sudan’s top general reappointed himself as head of the army-run interim governing body on Thursday, a sign that he's tightening his grip on the country two weeks after he led a coup against civilian leaders.

The move by Gen. Abdel-Fattah Burhan – along with other appointments he announced for the Sovereign Council – was expected to anger Sudan's pro-democracy protest movement, sidelined in the coup. Since the Oct. 25 takeover, pro-democracy leaders have demanded the military relinquish power and refuse to be part of any administration in which a military maintains a role.

Thursday's development, announced in a bulletin by Sudan’s state television, comes amid repeated promises from the military rulers that they will hand over power to civilian authorities. Since the coup, more than 100 government officials and political leaders have been detained, along with a large number of protesters and activists. Almost all remain in custody.

At least 14 anti-coup protesters have been killed due to excessive force used by the country’s security forces, according to Sudanese doctors and the United Nations. The military removed Prime Minister Abdalla Hamdok who has since been under house arrest in the capital, Khartoum, as Western powers and U.N. diplomats try to mediate a resolution to the crisis.

Sudan's culture and information minister, Hamza Baloul, who was arrested during the coup and later released, condemned the appointments. He described Thursday’s announcement of the new council as "an extension of the coup" and said pro-democracy protesters are right to refuse to negotiate with military leaders. Along with rejecting internationally backed initiatives to return to a power-sharing arrangement with the military, the protest movement has also called for a nationwide strike.

"We want to see a return to the transition as quickly as possible. We want to see the release from house arrest of Prime Minister Hamdok as well as all other politicians and leaders that have been detained.”

Sudan has been in the midst of a fragile transition since a 2019 pro-democracy uprising led to the removal of Omar al-Bashir. The 11-member Sovereign Council was first formed in the summer of 2019, after the military signed a power-sharing deal with pro-democracy forces.

A number of other members of the body sat on the previous council that al-Burhan headed before he dissolved it in the coup. Also reappointed to the body Thursday was the powerful paramilitary leader Mohammed Hamdan Dagalo, as vice-president. And al-Burhan reappointed as council members another three generals who had served in the previous council.

Three others on the council are leaders of rebel groups who fought al-Bashir's government for years, but who have moved towards peace with the transitional government. They all also served on the previous council. One of them, Malik Agar, a prominent leader of the Sudan Revolutionary Front, a rebel movement in Sudan's southern Blue Nile States, was one of signees to a historic peace accord with the transitional government in Juba, South Sudan last year.

Five of the members are civilians, only one of whom – Raja Nicola, a Christian lawyer – served on the previous body. She is one of two women appointees.

The agreement under which the council was formed after al-Bashir's ouster stipulated that the council should include five civilians chosen by activists, five military representatives chosen by the armed forces and one civilian member to be chosen in agreement between civilians and the generals.

The make-up of the new council falls short of the demands of key pro-democracy groups in the African county. The Forces for the Declaration of Freedom and Change (FFC), the main group that spearheaded the uprising that culminated in the overthrow of al-Bashir, has said that it would oppose the reappointment of al-Burhan to the top decision-making position.

"We did not break the partnership... and we must return to the constitutional document," an FFC spokesperson said, adding that the coup took place after civilians raised certain contentious issues.

"The coup does not represent the military institution," FFC said, according to London-based news site Middle East Eye (MEE). The spokesperson underlined that the coalition would not approve the return of al-Burhan as the head of state.

The coup has been condemned by the United Nations, the United States and the European Union – all of which have urged the generals to restore a military-civilian transitional government. Mediation efforts are ongoing to resolve the crisis.

Dujarric said that Volker Perthes, the U.N. special envoy for Sudan, met Tuesday with al-Burhan and also that U.N. Secretary-General Antonio Guterres spoke with Hamdok earlier in the week. Perthes gave the Security Council a closed-door briefing on the situation later Thursday.

Britain’s U.N. Ambassador Barbara Woodward said he "was very frank in his assessment that the window now is closing for dialogue and for peaceful resolution.”

Woodward said the Security Council is clear that "it is important to resume dialogue, that dialogue is the way forward.”

"We want to see important freedoms reinstated in Sudan," she said. "So we repeat our call for the military to engage in good faith to deliver a settlement that is based on the principle of genuine military-civilian partnership.”

According to a tweet by NetBlocks, the disruption is now in its 18th day and represents an "ongoing impediment” to democracy and human rights. A Sudanese court ruled on Wednesday, ordering the country’s three main telecommunications providers to restore internet access. However, authorities have not shown any sign yet of carrying out that order. 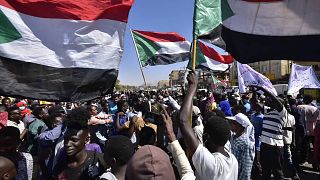