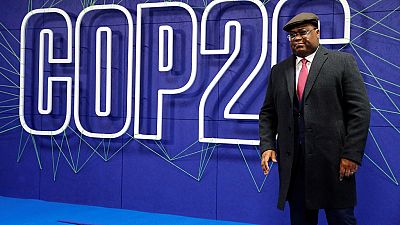 The President of the Democratic Republic of the Congo, Félix Tshisekedi pledged to fight the deforestation of the Congo basin rainforest, the second largest in the world after the Amazon, through a series of measures.

Speaking at the COP26 climate conference in Glasgow on Tuesday, Tshisekedi, who currently chairs the African Union, said his country was increasing its determined contribution at the national level to achieve a 21% reduction in greenhouse gas emissions by 2030, launching a programme aimed at planting one billion trees by 2023 and expanding their energy mix to include greener choices.

"In addition, the protection of the rights of local communities and indigenous peoples is essential," Tshisekedi said.

"We are committed to taking this into account in our industrialization strategy, agricultural investment and forest governance."

The measures are in line with the green recovery plan for Africa launched by Tshisikedi in his capacity as President of the African Union, aimed at strengthening actions in favour of environmental sustainability and prosperity in Africa.

More than 100 countries are pledging to end deforestation, which scientists say is a major driver of climate change.

Britain hailed the commitment as the first big achievement of the United Nations climate conference in Glasgow.

But campaigners say they need to see the detail -- such promises have been made, and broken, before.

The U.K. government said it has received commitments from leaders representing more than 85% of the world’s forests to halt and reverse deforestation by 2030.

More than 19 billion US dollars in public and private funds have been pledged toward a deforestation plan, which is backed by countries including Brazil, China, Colombia, Congo, Indonesia, Russia and the United States.