UN Security Council delegates, led by the ambassadors from the US, France and Niger, arrived in Bamako for two days of talks to push the military-led interim government for a return to democracy after two coups in nine months.

The delegation adds to international pressure on coup leaders to abide by a February 27 deadline set by the Economic Community of West African States (ECOWAS) for a presidential election, a deadline that the regime is openly suggesting might be missed.

Kenya's ambassador to the UN, Martin Kimani said it would be ideal for them to have a better understanding of the situation in Mali in order to know how best to help.

Malian Minister of Foreign Affairs & International Cooperation Abdoulaye Diop welcomed the delegation adding that the meeting would help to give a progress report by the government.

"We welcome this mission with open arms. We found this an opportunity to present the reality of the situation in Mali, and also to present the progress that is being made by the transitional government. But also to present our vision of what must be done to complete this transition, through the organization of transparent and credible elections."

In a statement released on Friday Human Right Watch had urged the UN mission to use this as an oppourtunity to encourage Malian authorities to "investigate a spate of alleged summary executions, enforced disappearances, and detentions by government security forces".

It is alleged that since September, at least 14 men last seen in the custody of security forces, had disappeared or remain in "incommunicado detention".

The bodies of three men allegedly executed after their arrest by solders earlier this month were found nearby an army camp, it said.

HRW Sahel director Corine Dufka is reported to have said "Mali's transitional government shouldn't be standing back while its soldiers are linked to a wave of abuses, The army earlier this month said it had investigated images published online that purported to show torture and the bodies of victims, and that those involved had been sanctioned and "placed at the disposal of the gendarmerie".

the poor and landlocked nation that is home to at least 20 ethnic groups has been racked by jihadist and intercommunal violence, as well as coups in August 2020 and May this year.

Military intervention by France and the UN has failed to quell an Islamist insurgency that has swept into central Mali and spilled over into neighboring Burkina Faso and Niger, leaving thousands dead and forcing hundreds of thousands from their homes. 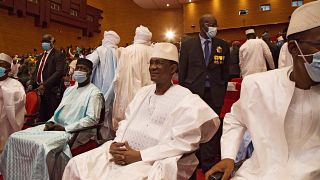