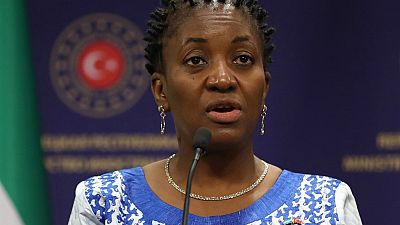 Sierra Leone's government on Thursday introduced a bill that would ensure that 30 percent of parliamentary seats and cabinet positions are held by women in the West African state.

President Julius Maada Bio approved of the initiative this summer, making good on a 2018 campaign pledge to boost women's representation in politics.

Presenting the so-called gender empowerment bill to lawmakers, Gender Minister Manty Tarawalli said that the law would "change the dynamics for women and increase opportunities".

Among other things, the bill would mandate that 30 percent of seats in Sierra Leone's 146-seat parliament be occupied by women, as well as 30 percent of cabinet posts.

The bill also aims to improve women's access to finance, and to link government spending to improving gender equality.

It is not immediately clear when lawmakers will vote on the bill, with further parliamentary debates planned.

As in many other West African countries, women are poorly represented in Sierra Leonean politics.

Eighteen MPs in the country are currently women, representing about 12 percent of the total. And there are only four female members in President Bio's 32-member cabinet.

Sierra Leone also ranked 182nd out of 189 countries on the UN's 2020 Gender Development Index. Nearly half of the countries in the bottom 20 are in West Africa.

Many women and girls also face high levels of sexual violence, partly a legacy of the use of rape as a weapon during the civil war of 1991-2002.