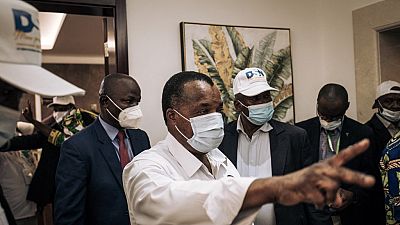 The Republic of Congo on Wednesday denied allegations in the "Pandora Papers" global exclusive which said President Denis Sassou Nguesso had used an offshore company to stash away assets.

"The Congolese government denies with the utmost firmness any involvement by President Sassou in the Pandora Papers, either personally or in his official capacity," government spokesman Thierry Moungalla told AFP.

"President Sassou reserves the right to prosecute anyone who reiterates these accusations without providing any supporting evidence."

Sassou Nguesso features among several hundred political figures such as Kenyan president Uhuru Kenyatta, who use offshore tax havens to store away assets, according to the inquiry led by the International Consortium of Investigative Journalists (ICIJ).

The scoop, released in stories by media partners including The Washington Post, the BBC and The Guardian, is based on nearly 12 million documents leaked from financial services companies.

The inquiry said that Sassou Nguesso had had an offshore account in the British Virgin Islands for nearly 20 years.

One of the world's longest serving leaders, Sassou Nguesso, 77, has been in power for an accumulated 37 years, first taking the helm in 1979.

Critics have accused him of authoritarian rule and turning a blind eye to corruption, poverty and inequality despite the country's oil wealth.

He was re-elected in March with 88.4 percent of the vote, after a ballot boycotted by the main opposition.