The Blitzboks of South Africa managed to win their 35th gold medal after beating the Shujaas of Kenya 35-2 at the World Rugby HSBC Sevens Series Vancouver on Sunday.

Winger Angelo Davids two tries in the opening five minutes to give the Boks an advantage over Kenya in the title race.

The pair of tries in the final were among 10 that Davids, who has also played 15-a-side Super Rugby with South Africa's Stormers, scored in six matches in the two-day sevens tournament.

"I am really proud of the boys. I really think starting this camp for this tournament after a disappointing Olympic campaign, coming here this weekend, we really tried to lick our wounds and put up a good fought and we took it a game at a time. And I am so grateful we could come up with a victory," Siviwe Soyizwapi, South Africa Sevens player said.

This was the first all-African cup final since 2008 Adelaide, and the only one in the series history.

Attention now shifts to the season-ending Edmonton Sevens next weekend still in Canada. 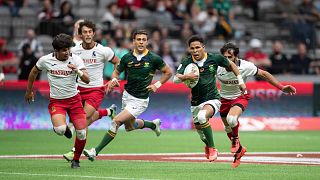